Where does one start when she has so much to say…at the beginning I guess.

Paynesville is a tiny little town on the shores of the Gippsland Lakes in East Gippsland, I honestly could not tell you what the population is, but I do know it has grown by the thousands since I grew up there.  I do know that it is small enough that you generally know everyone, everyone goes to the same Kindergarten and the same primary school before we all venture out to the next town and join the rest of the primary school kids at the two big high schools on offer.

I was in Primary School when I first met Gemma.  She was in the year below me so we were in the same class together probably a number of times.  As we grew and headed into high school, we travelled on the same bus, and Paynesville kids just had this familiarity with each other, while we may not have socialised in the same circles, we shared common ground from the little town on the water.  As we grew up we shared more classes together and eventually as most country kids do, moved away and started our lives.

Facebook came alive and we all started to reconnect online.  Keeping in touch with the thumbs up button, watching each others lives carry on in our own way.  I started my Photography Business and Gemma was one of my biggest supporters.  Always liking my photos as I posted, commenting when she had something to say, sharing things with her friends and simply taking an interest.  The best kind of support anyone can give a small business like mine.

I was so excited when Gemma asked me to head to Geelong to help surprise her Brother Simon for his 30th birthday.  Gemma and Mum Narelle now live in QLD and like most who live far away, don’t get to visit anywhere near as often as they would like.  Ben and Cassie still live in Paynesville with their incredibly adorable little people, so being all spread out, this was a rare occasion when they would all be together!  Of course it had to be photographed!

It was a weekend of surprises for the family as Gemma’s arrival from Queensland was a surprise for Simon’s birthday, but then, little did I know, my presence on the day was an even bigger surprise for Narelle who had been under the impression that they were all getting up at the crack of dawn for Cassie to take some nice photos of them…so I was completely on edge all morning as I waited in the car!  Surprise number 3 was still to come and to be perfectly honest, I was sure I was going to put my foot in it before the time was right…

Due to the very short visit and party plans, time was limited, so I somehow managed to convince them all to get up before the sun and meet me for a sunrise shoot on Bancoora Beach…thankfully it was January so it wasn’t as cold as it could be, but it was a cloudy day, so we didn’t get to see a whole lot of sun rising…but in a way I am thankful we didn’t, because the light was just beautiful!! 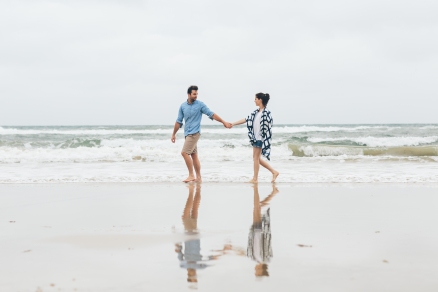 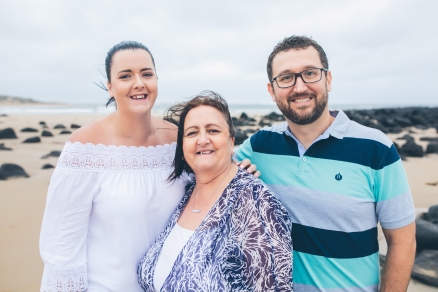 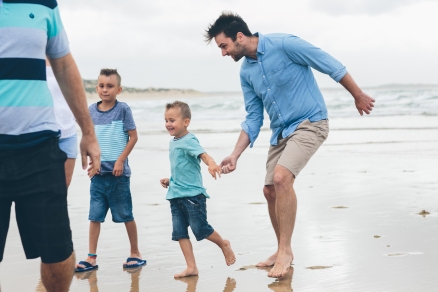 Extended family sessions are always SO much fun!  I adore them, the laughter is endless, the kids are crazy excited because there’s so many people around, it’s complete organised caos on my end as I ensure every single person gets to shine.  But really, it is simply just a regular family session, with a few extra family members joining in the fun!

We ran along the beach, the big kids jumped in the water, found a beautifully coloured, but very dead fish, had group hugs and piggy back rides.  It was the most relaxing morning I have spent on the beach in a long time and the most fun I have had with an extended family in so long!  I think perhaps I am a little biased though as it’s a little different when you are so familiar with them, these people are my childhood, they remind me of Paynesville, of home and it is just such a blessing to be thought of, to be supported for so many years and to included in the surprises…oh yeah the third surprise.

A couple of weeks before the session, I received a message through Instagram from Louise.  She had some very exciting news that she was hoping to share with the family at the session…Simon and Louisa were expecting a baby!  Of course I jumped with no hesitation at this idea and instantly had ideas in my head about how we could do it.  Together we decided to save it for the end, to get through all the little bits and pieces and then get together for a big group photo and then spill the beans…so of course, as I said above, I was on edge the WHOLE time!  I LOVE a good surprise, but seriously, the suspense just kills me!

So the deal was, I was to just act normal, take a few photos, tell my usual very bad jokes, and then ask if anyone has a story to tell…Simon piped up and said he did.  The family, who were all in the dark thought it was just funny that he jumped at the idea of telling them a story, and then, the shock on their faces, the excitement, the tears in the eyes…oh this was my absolute favourite photo!  The LOVE guys!!  The unconditional joy a brand new baby brings to a family, it was an honour to photograph this moment, it was also a massive relief as all the suspense tension washed away and the weight off my shoulders lifted as I photographed these moments for them to remember forever.

Now THAT is how you start a Saturday ❤

Thank you Taylor family from the very bottom of my heart for supporting me, for thinking of me and for trusting in my secret keeping skills!